Wing clipping is a crucial part of caring for your pet bird. It is also the subject of much debate among avian enthusiasts – to clip or not to clip? Free flight or no flight? 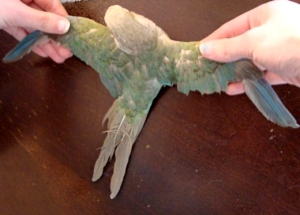 This parrot had too many feathers trimmed off

Keeping your parrot’s flight feathers trimmed is a way of keeping him safe, right? Not necessarily. Each parrot and each home is different and what is right for one may not be right for others. There are many options available when it comes to wing clipping but there are also some things you NEVER want to do. Working in the pet industry you see a lot of bad clips. Sometimes a well-meaning but uneducated bird owner will attempt to clip their bird themselves and mistakenly trim too many feathers. Sometimes a bad clip results from a trip to an inexperienced groomer, which is probably worse because in this instance the owner has actually paid for it! While the aesthetic aspect of a bad clip may not affect everyone and the birds certainly don’t seem to care, the danger that it can pose for your parrot is certainly cause for concern.

Wild birds rely on their wings to find food, water, shelter, and companionship. A broken wing or loss of flight feathers may be a death sentence to a wild bird. Fortunately, a bad clip does not mean the same for our pampered, feathered friends in our homes. But it can make it easier for parrots to injure themselves. A parrot who loses his balance in his cage while playing may come crashing down to the bottom without wing feathers to aid him; a grounded parakeet may become a play toy for an overly curious house cat; a parrot walking across the floor may be stepped on by members of his family who are unaware that he is on the floor. I have personally heard of this happening on more than one occasion. There are just as many dangers inside our homes on the ground as there are in the air. This is why it is crucial for parrot owners to educate themselves about the hows and whys of wing clipping. One clip most certainly does not fit all.

a wild parakeet foraging for food

The purpose of trimming the flight feathers of pet birds is usually to prevent them from flying away. But did you know that for some parrots this can be accomplished by trimming merely three or four feathers? The wing of a bird is covered in three main groups of feathers: the covert feathers, and the primary and secondary flight feathers. The covert feathers are the smallest feathers of the wing that cover the part nearest to the body. These feathers should never be cut, under any circumstances. The primary flight feathers are the longest, outermost feathers on the tip of the wing. These are the feathers that are trimmed during a grooming, but never shorter/higher than the line of covert feathers above them. Secondary flight feathers are found on the outside edge of the wing, towards the tail end of the bird, behind the primaries. For some birds, clipping the secondaries renders them helpless and defenseless. For others, it merely enables them to fly safely at low speeds. This is where it becomes important to know your bird and to discuss the clip with the groomer.

A Blue and Gold Macaw shows off his custom wing clip

Heavier parrots, like macaws and large cockatoos, rely on each and every feather to lift their heavy bodies during flight. For these birds, clipping just the first few feathers is enough to prevent them from flying off into the sunset. There are exceptions of course, especially if the bird has been able to fly for a while and has developed stronger muscles for propulsion. In this case, more feathers would have to be trimmed to prevent flight. With smaller, more streamlined parrots, a more drastic clip is almost always required. Although, again, there will always be exceptions. A cockatiel that has sustained an injury may need every feather just to glide safely to the ground.

Here you can see growing blood feathers. These feathers cannot be clipped without injuring the bird

In addition to considering the species and personal background of the bird, owner and groomer must also consider the molting cycle of the parrot. Birds that are currently molting will grow feathers at a much more rapid pace. Clients often ask how frequently their birds need to be brought in for grooming, and the answer is that it depends on the bird. If a bird is actively molting when they are brought in for a clip, theoretically, it could be merely a week before they need to be brought back in for another clip due to the rapid rate of feather growth. Another concern with molting birds is the blood feathers.  Groomers must be able to recognize a blood feather when they see it and should never clip one. Blood feathers are so-called because there is still blood cycling through the shaft of these undeveloped feathers, which is usually visible as a blue or red coloration inside the feather shaft. Cutting a blood feather causes pain for the parrot and could potentially, in a worst-case scenario, result in death if the bleeding cannot be stopped. There are occasions when clients have to be told to wait a week or two before we can groom their bird as all of their parrot’s flight feathers are blood feathers. (If this happens with your parrot, please be advised that they may be able to fly without warning. A parrot that was previously grounded may attempt to fly when new feathers are growing, and they will probably be able to do it. Keep your birds on a leash or indoors during this period to prevent them from possibly flying away.) On the other end of the spectrum are birds that are not actively molting. These birds may not have any feather growth happening and until the molt cycle begins it may stay that way. Sometimes a bird won’t go through a molt cycle for a good six months! This is not the norm, but it is more common than you might think. These birds won’t have to be seen for another grooming until the molt cycle begins since there is no feather growth.

Through careful and knowledgeable clipping it is possible to give a parrot enough flight capability to go from point A to point B without enabling him to fly circles around the house or dive-bomb his caretakers. For many, this is the ideal clip. Some prefer that their bird only be able to glide safely to the ground should they happen to fall. Still others enjoy seeing their parrot soaring freely in their living room. Here at the Golden Cockatoo we strive to make every grooming a personal experience. We encourage clients to talk with us about their needs and those of their feathered companions before a single feather is trimmed. Our staff has been grooming for decades and we aim to please with every clip and every snip. We understand that every bird is different and take great care to make sure that everyone’s needs are met. We also understand that the grooming procedure can be stressful to some birds. Our staff is always patient and gentle with your bird and will perform the grooming as quickly and stress-free as possible.

When was the last time your groomer asked what you wanted to accomplish with the clipping? If your bird was a strong flier or if you wanted your parrot to be able to perform minimal, short-distance flights or none at all? If your groomer isn’t asking these questions, then maybe it’s time you started asking some of your own – for instance, what are their credentials?

If your parrot is in need of a grooming and you live in the South Florida area, stop by and speak with one of our experienced groomers. We perform the grooming right in front of you and encourage you to be involved. Some pet stores take the bird away from the owner and retreat to a back room to perform the grooming, ensuring that the parrot owner is unable to comfort their bird, and – perhaps more importantly – preventing them from seeing how their parrot is being treated. This is never the case at Golden Cockatoo. Our grooming counter is open and visible to the rest of the store, making it so that bird owners can even shop while their bird being groomed – great if you’re in a hurry! If you’re not in the South Florida area and would like to speak with one of our experienced groomers anyway, feel free to give us a call. We’re always happy to help with any questions you may have. For more information on our store’s grooming services, visit our page here http://www.goldencockatoo.com/bird-grooming.html